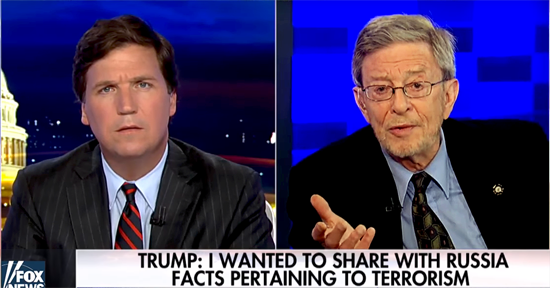 For decades Stephen Cohen taught and researched Russian politics at Princeton and NYU. He joined Tucker Carlson for a discussion the frenzied Russia preoccupations of the media and Democrats targeting President Trump.

He doesn’t buy the fertilizer the Democrats are shoveling, that President Trump passed critical intelligence to the Russians in a meeting at the White House. Not only does Prof Cohen not believe it happened, he adds, “Nor have I ever, in these decades you mentioned ever heard an elected member of Congress say that we should have no relations with the Russians at all. Presumably that would include nuclear weapons control.”

Cohen presumes it’s a Democrat, likely from the level of the idiocy that was coming out of his mouth, who asked what are the Russians doing in the White House anyway. He says, “Well, they’re doing, with President Trump the national security of our nation. Because what’s at stake here is a proposal by Putin of Russia, by Trump of America, to join hands, in an alliance against international terrorism.”

Cohen says that if Carlson would have asked him a few days ago what the number one threat to the United States was, he would have answered, “international terrorism.” He continues, ‘Today I would say it’s this assault on President Trump, because it’s been going on a year. And can we be clear, what he’s being accused of is treason. This has never happened in America that there’s a Russian agent in the White House.”

He says, “And we’ve had a whole array of allegations, from Putin helped him get in the White House to his associates are doing wrong things with Russians, that Flynn did something wrong with talking to the Russian Ambassador. There’s no evidence that there was any wrongdoing and indeed Flynn should have talked to the Russian Ambassador, that was his job. So this is beyond belief now and has become , by this I mean this assault on Trump and his loyalty. This has become a national security threat to us in itself.”

Cohen believes “two motives have driven this, saying, “I think, false narrative against Trump, that he’s somehow a Kremlin agent. One is the Clinton wing of the Democrat Party which doesn’t want to admit she lost the election, wants to say, ‘I, Clinton, won but Putin stole it from me, and that may be because she wants to run again.” He says, “At the same time, there has long been, in Washington, a powerful, let’s call it the fourth branch of government, the intelligence services, who have opposed any cooperation with Russia.”

Thank you for reading and sharing my work – look for me, Rick Wells – http://RickWells.US