The migrant tsunami that is already deluging the European Union is on track to also swamp America. A huge nationwide “refugee resettlement” network is already in place to ramp up the escalation planned by the U.S. State Department for acceptance of United Nations-designated migrants. A map of the United States produced by the State Department’s Bureau of Population, Refugees, and Migration (shown above) shows the areas where its “contractor” organizations are set up to bring the migrant wave to what the State Department propagandists calls “welcoming communities.”

Organizations such as International Rescue Committee, U.S. Committee for Refugees and Immigrants, Church World Service, World Relief, Lutheran Immigration and Refugee Service, and many more “contractors” receive hundreds of millions of tax dollars from the State Department (DOS), Health and Human Services (HHS), Housing and Urban Development (HUD), as well as foundation grants, to bring in migrants designated as refugees by the UN High Commission for Refugees. 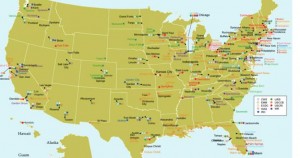 Across the country, from Portland, Maine to Portland, Oregon, from Boston to San Diego, from Seattle to Miami — and dozens of points in between — cities and towns are targeted to receive a flood of Muslim “refugees” from Syria, Iraq, Libya, Somalia, Afghanistan, and other parts of Africa and the Middle East. It’s not only our major coastal cities that are scheduled to be hit with an enormous influx of unfortunates from foreign lands; smaller heartland cities and towns, such as Sheboygan (Wis.), Twin Falls (Idaho), Grand Forks (N.D.), Lexington (Ky.), Turlock (Calif.), Spartanburg (S.C.), Abilene (Texas), Cedar Rapids (Iowa), and many more, have also been targeted for their “share” of UN-assigned “refugees.”

The Obama administration, besides proclaiming amnesty (unlawfully, by executive order) for the 12-20 million illegal aliens already in the United States (and doing everything possible to expand the legal and illegal migration flows to America), has already set in motion plans to “surge” an unspecified, open-ended number of Syrian refugees into the country, despite the fact that top intelligence officials have publicly testified that they have no way of vetting these individuals to be sure we are not admitting terrorists and other criminals.

Notwithstanding these serious security concerns, the State Department is busily sending its officials hither and thither across the country to falsely assure local residents, as well as state and local government officials, that there is nothing to worry about. White House Deputy Press Secretary Eric Schultz said any refugees would be “subject to the highest level of security checks,” Bloomberg News reported on September 9. Other administration officials have made similarly unfounded claims.

The Refugee “Surge” Has Started
It was Assistant Secretary of State Anne Richard, who heads the Bureau of Population, Refugees, and Migration (PRM), that nearly a year ago announced the Obama plan to “surge” Syrian refugees into the United States. At a conference in Geneva, Switzerland, with UN High Commissioner for Refugees Antonio Guterres on December 9, 2014, Assistant Secretary Richard stated: “The United States accepts the majority of all UNHCR referrals from around the world. Last year, we reached our goal of resettling nearly 70,000 refugees from nearly 70 countries. And we plan to lead in resettling Syrians as well. We are reviewing some 9,000 recent UNHCR referrals from Syria. We are receiving roughly a thousand new ones each month, and we expect admissions from Syria to surge in 2015 and beyond.”

More recently, during a joint press appearance in Berlin with German Foreign Minister Frank-Walter Steinmeier on September 20, Secretary of State John Kerry gave a further hint at what is to come, announcing the Obama administration’s plan to dramatically increase the flow of refugees into the United States, citing specifically refugees from Syria. “I’m pleased to announce today that the United States will significantly increase our numbers for refugee resettlement in the course of this next year and the year after,” Kerry said. “Last year I think we were at 70,000,” he noted, referring to refugees worldwide accepted by the United States. “We are now going to go up to 85,000 with at least, and I underscore the ‘at least’ — it is not a ceiling, it’s a floor — of 10,000 over the next year from Syria specifically even as we also receive more refugees from other areas. And in the next fiscal year, we’ll target 100,000, and if it’s possible to do more, we’ll do [more].”

The Refugee Lobby
Completely under the radar of most Americans, a massive industry of tax-funded non-governmental organizations (NGOs) has built a nationwide network to lobby for admittance of ever-increasing numbers of migrants claiming refugee or asylum status.

The State Department map of the United States referred to above provides a color-coded legend showing colored circles representing corresponding refugee contractor organizations designated by acronyms. We are providing below the actual names of the abbreviated organizations, as well as important background information on some of them: